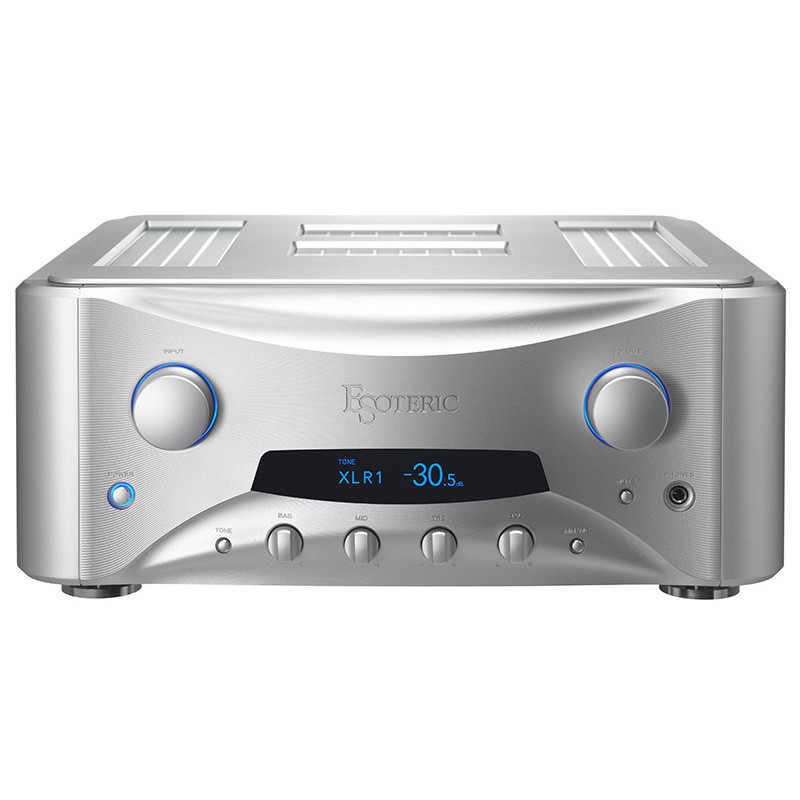 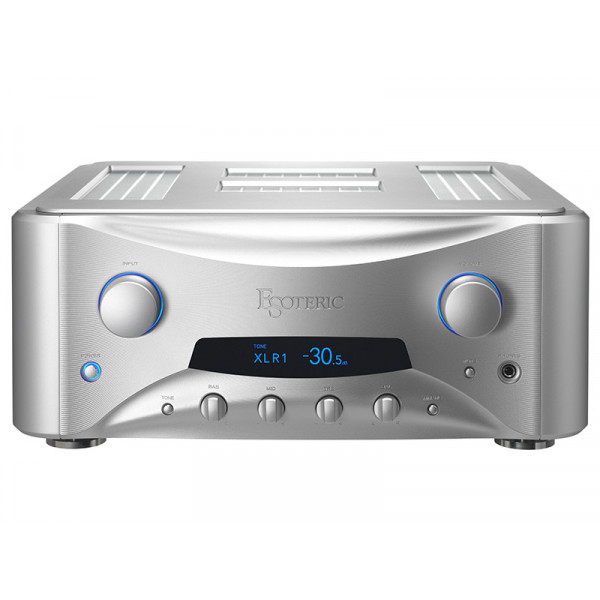 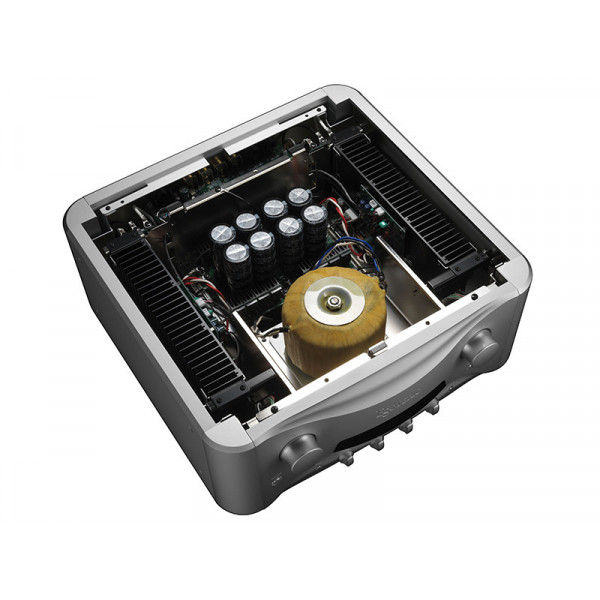 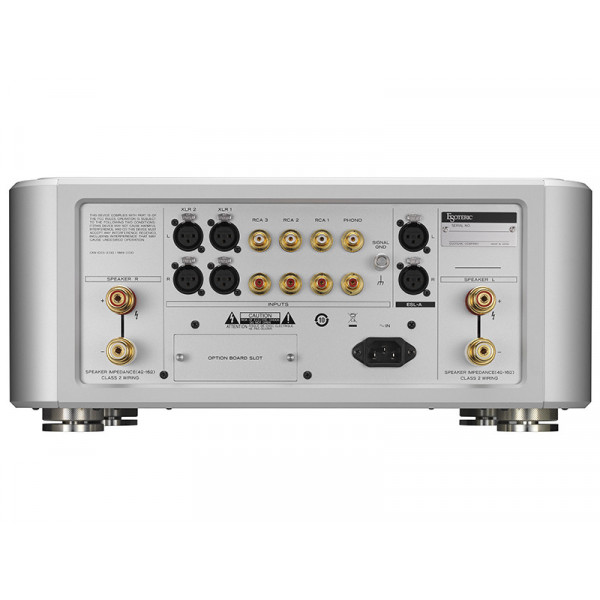 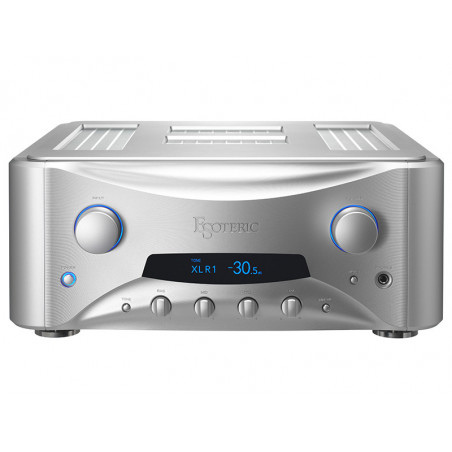 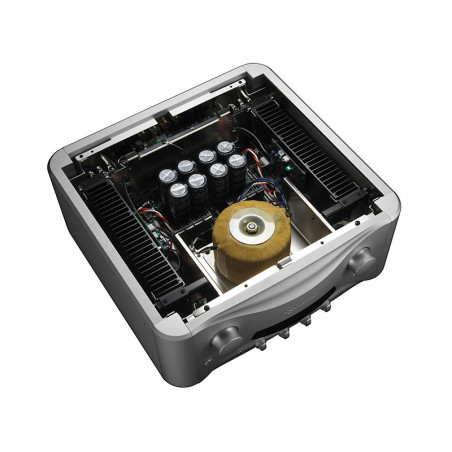 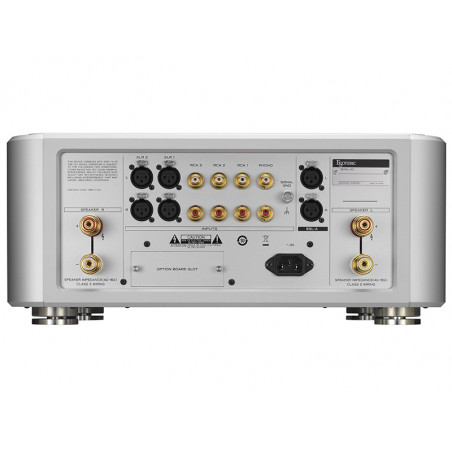 The Grandioso F1 is a fully balanced preamplifier that descends from the Grandioso C1. It is resilient to noise, and can amplify signals purely and powerfully with low impedance.

A dual monaural configuration with separate left and right sides has been adopted for all stages; from the preamplifier stage to the final stage of the power amplifier. The inclusion of the largest amount of materials ever used in the circuits of an all-in-one Esoteric amplifier ensures both superior sound quality and channel separation.

In addition to regular line connections (XLR and RCA), the Grandioso F1 features the new "ES-LINK Analog" transmission method developed by Esoteric. This current transmission method utilizes the high performance of the HCLD buffer circuit and its enhanced ability to supply power at high-speed to transmit a pure and strong signal with minimal interference from the impedance of the signal route. This is the ideal method for analog audio transmission as it fully maximizes the system's potential when connected to a compatible device.*

*Included in the Grandioso K1 as of September 2016. A standard balance cable (with an XLR terminal) is used for connections, but the "ES-LINK Analog" method can only be used with compatible devices since it is a proprietary transmission method.

The F1's Esoteric-QVCS* volume control employs four precision switched resistor ladder networks, which change in unison as the volume knob is rotated. This arrangement allows the signal paths for the left and right channels and their positive and negative phases to be kept totally independent and as short as possible. Consequently the sound has superb clarity, excellent channel separation and highly accurate phase characteristics. The elimination of audio board wiring to the volume control further contributes to a reduced signal path, while preventing degradation of sound quality and helping to maintain the low distortion one would expect of a reference model.

All control systems in the Grandioso F1 are electrically separated from the main preamplifier using isolator chipsets and contained in the front panel to effectively minimize noise.

Employing the same high-precision bearing system used in our VRDS transport mechanisms, the F1's volume control knob and selector switch provide exceptionally smooth operation with an analog feel free of any mechanical play. Sparing no cost, the front panel and all panel knobs are custom-machined from solid aluminum.

Commitment to achieving all the quality associated with high-end components results in a balanced dual monaural configuration consisting of four circuits (L/R, -/+) for each band. This system enables users to adjust tone settings free of any concerns about sound quality deterioration. Shifting the variable band more than usual toward the high and low frequency ranges (14kHz/63Hz) permits fine adjustment of bass and treble without adversely affecting the original source signal. Fully electronic control also permits fine adjustment of up to ±12dB in 0.5dB steps.

Each year it is becoming harder to obtain discrete parts with excellent audio quality. That is why Esoteric, which prides itself on in-house production, decided to collaborate with New Japan Radio Co., Ltd. to develop a proprietary MOSFET device that meets stringent sound quality and performance standards. After more than two years in development, we finally completed our first proprietary MOSFET for the Esoteric brand, called the ESOTERIC MODEL200.

The ESOTERIC MODEL200 is a dedicated MOSFET device for the power amplifier output stage that uses a next generation power device and the widely lauded high-tech material called silicon carbide (SiC). Since it features lower capacity and lower loss than regular silicon devices, its current tolerance performs amazingly well in benchmarks, with a maximum instant current of 150 A and continuous current of 78 A. Since it can freely control a large current with quick startup, it is excellent for driving low-frequency ranges and provides powerful playback of music. Furthermore, its greatly improved transient response provides extremely low noise with high-frequency ranges for lively and vibrant sound throughout the entire audio spectrum. This is the ideal MOSFET device for a flagship model, due to its ability to powerfully, flexibly and naturally follow the dynamics of ever-changing music.

The Grandioso F1 adopts a newly-designed parallel push-pull Class A power amplifier circuit to bring out the most of the ESOTERIC MODEL200 silicon carbide MOSFET. This faithfully adheres to the Esoteric amplifier philosophy of using impressive quantities of the finest materials while adopting a minimal circuit configuration to ensure the shortest signal route, and achieves both pure amplification and speaker drive ability rivaling that of separated models.

The front stage of the power amplifier has been balanced to achieve clean amplification at low impedance and further increase the dynamic range heard by the listener.

As one of the most important factors in deciding an amplifier's ultimate sound quality, the F1's robust power supply plays a critical role in its ability to deliver high power in a linear manner. The power supply's large 1,000VA toroidal transformer provides the foundation for the F1's exceptional power output. With the knowledge that an amplifier's sound quality is ultimately determined by the quality of its power transformer, the F1 employs a custom power transformer that demonstrates Esoteric's highly developed expertise in material selection, core size and even mounting technique.

The power supply also features 40,000µF block capacitors for each channel in a dual monaural configuration. Large-gauge cable is used in all connections to help minimize impedance. This outstanding power section achieves a theoretically linear power output ranging from 30W at an 8Ω load to 60W at 4Ω for faithful reproduction of every musical dynamic.

The F1's 3D Optimized Chassis features robust construction that gives each circuit block its own dedicated compartment. Interference between circuits is effectively minimized while achieving the shortest possible cable routing. Chassis exteriors are formed of thick aluminum panels manufactured without compromise following the same design philosophy imbued in Esoteric's separate amplifiers. As a result, the F1 achieved a extremely heavy-duty construction not normally found in conventional integrated amplifiers. Our patented steel pinpoint feet* support the F1 at four points in order to minimize the negative effects of vibration.

An optional board slot facilitates the installation of an optional board, such as OP-DAC1 D/A Converter Board or OP-ESLA1 ES-Link Analog Input Board. 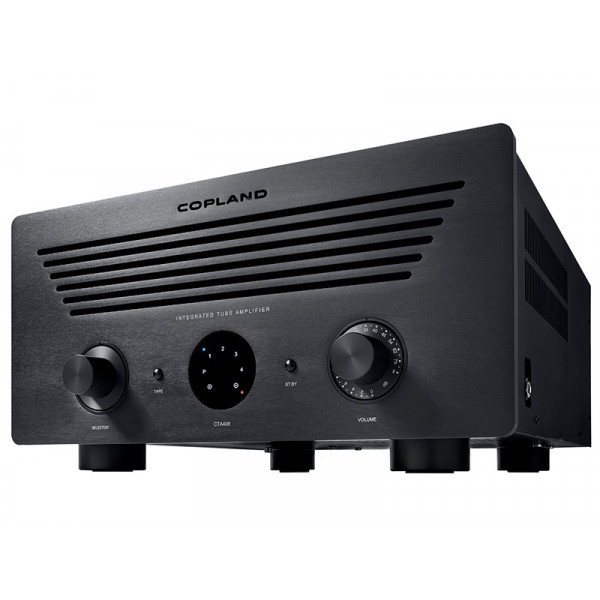 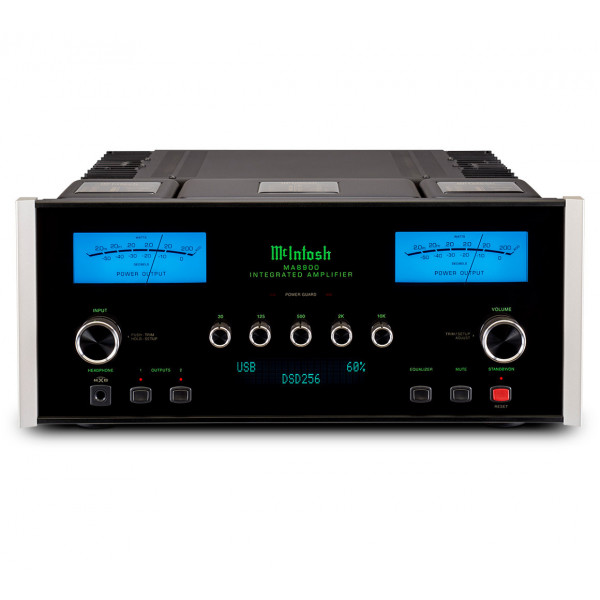 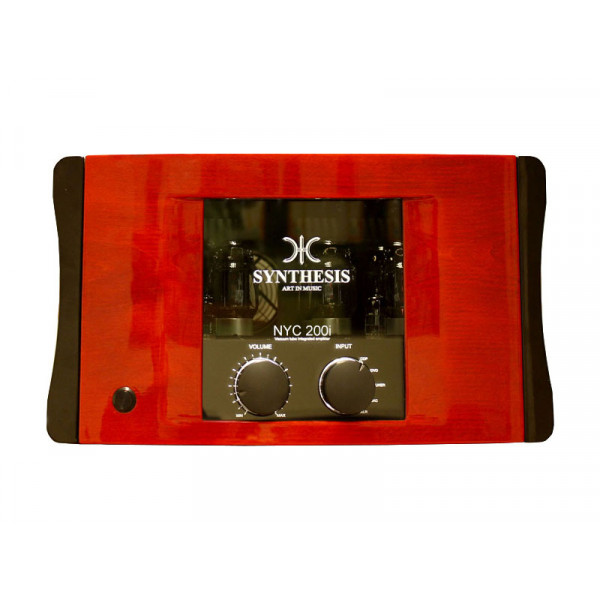 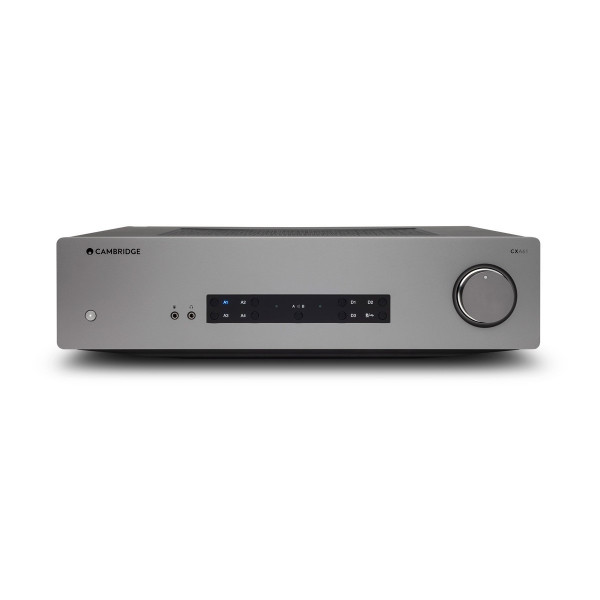 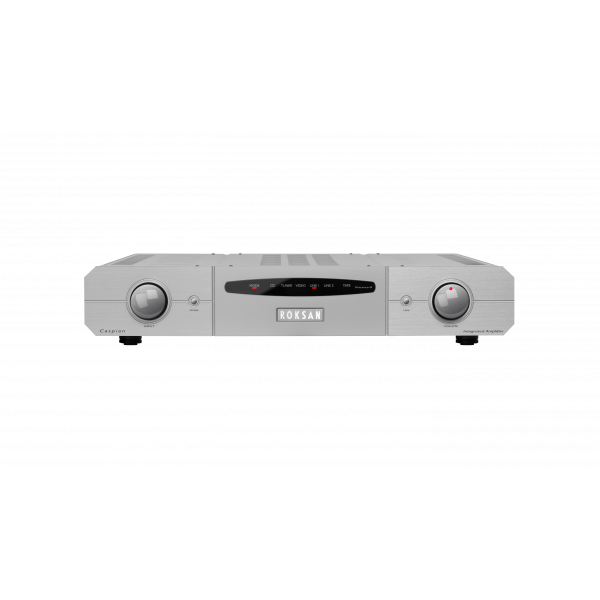 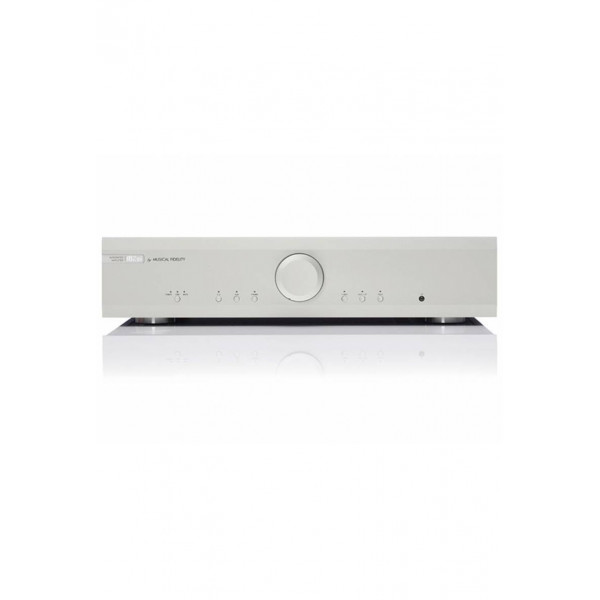 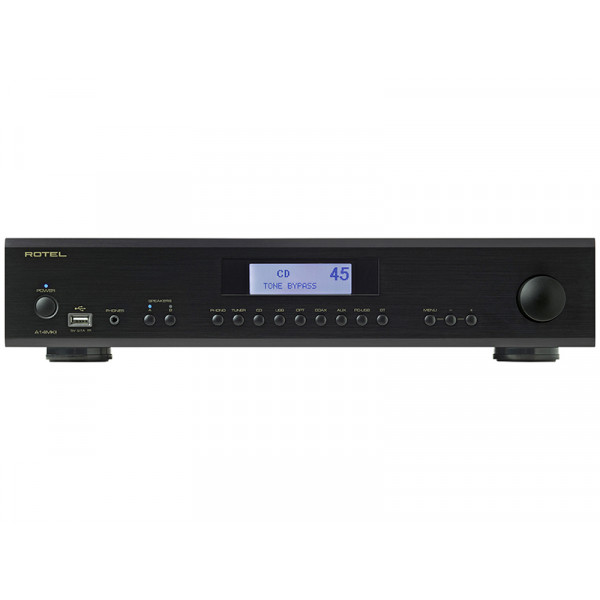 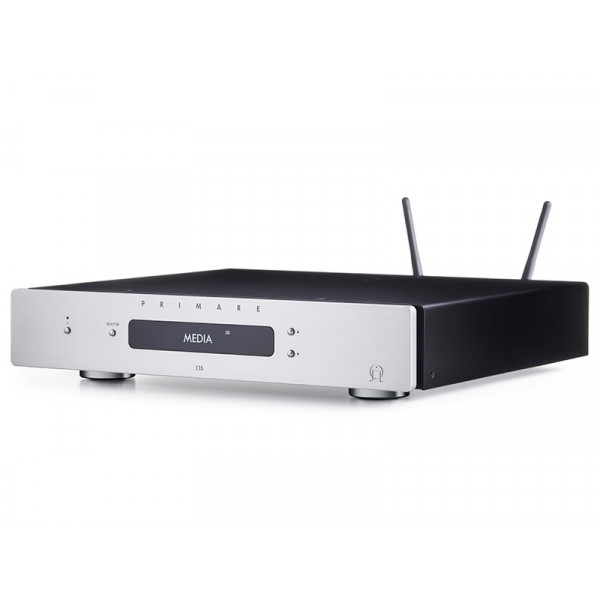 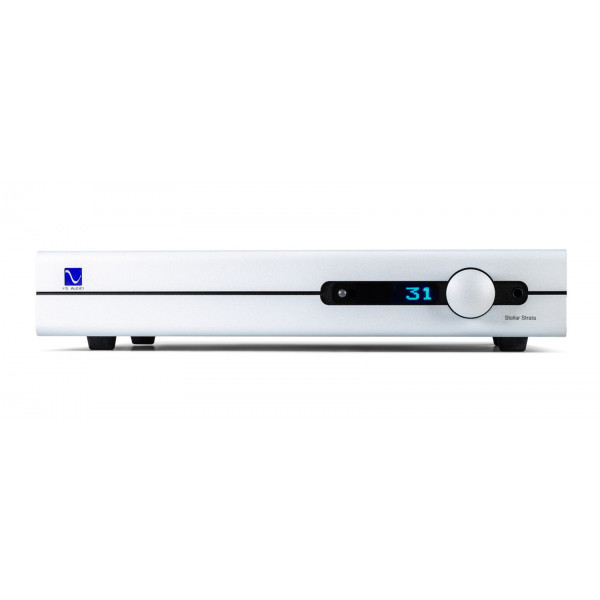 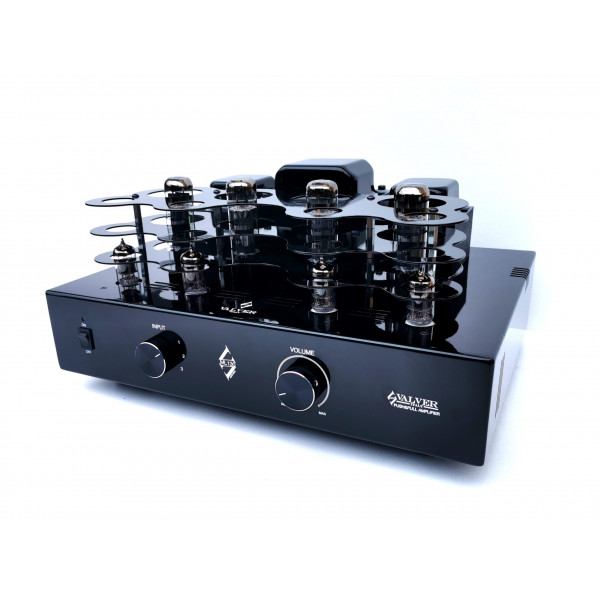 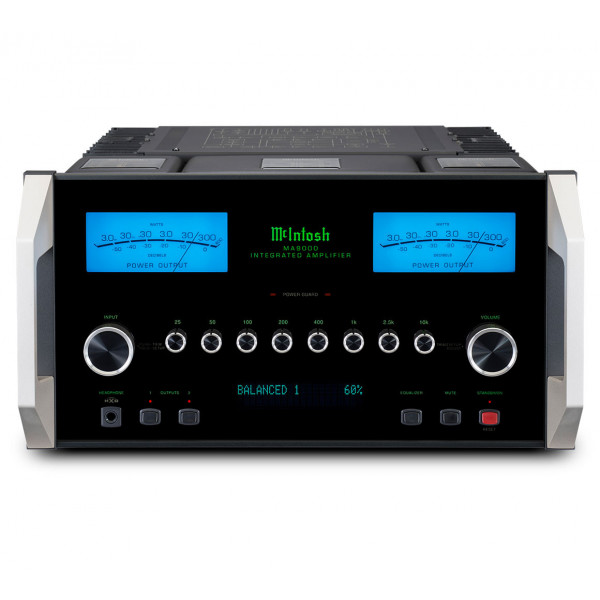 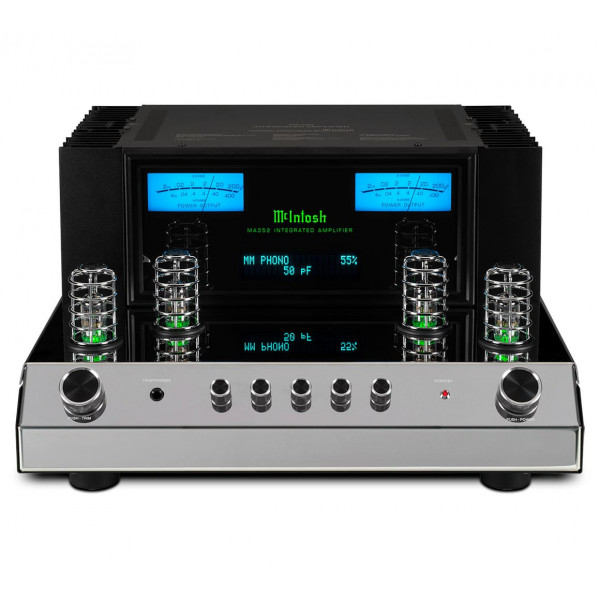 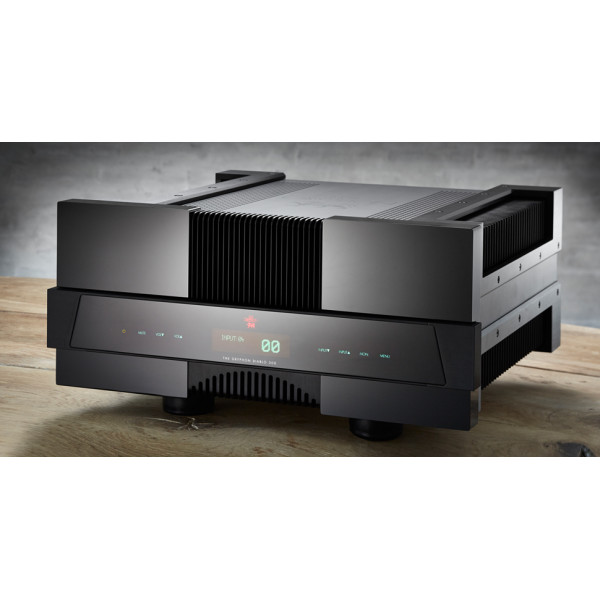