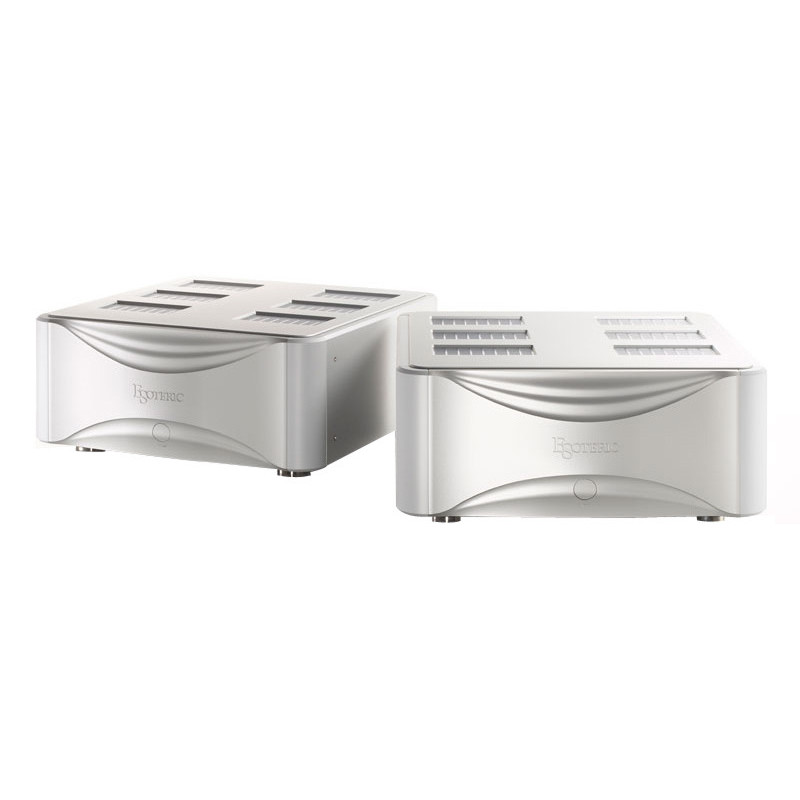 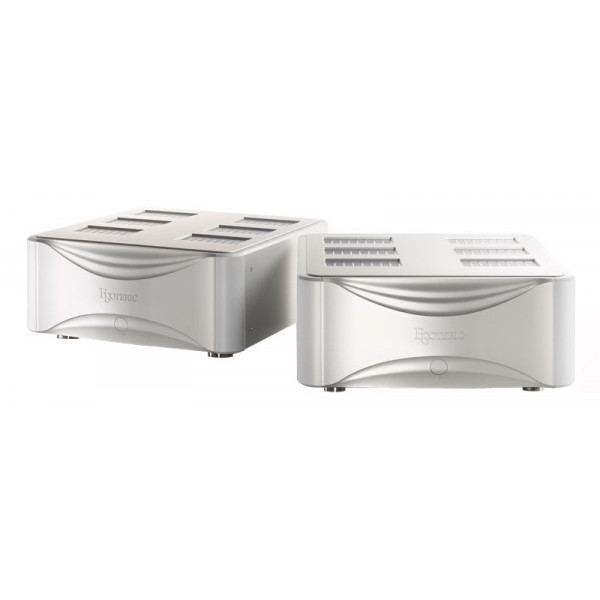 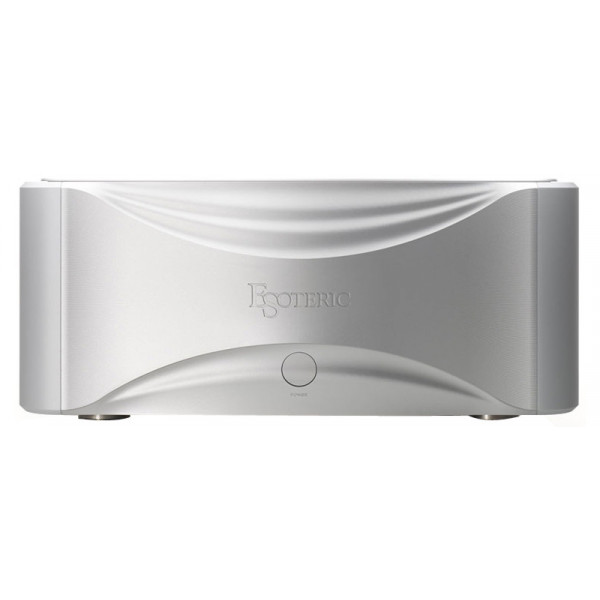 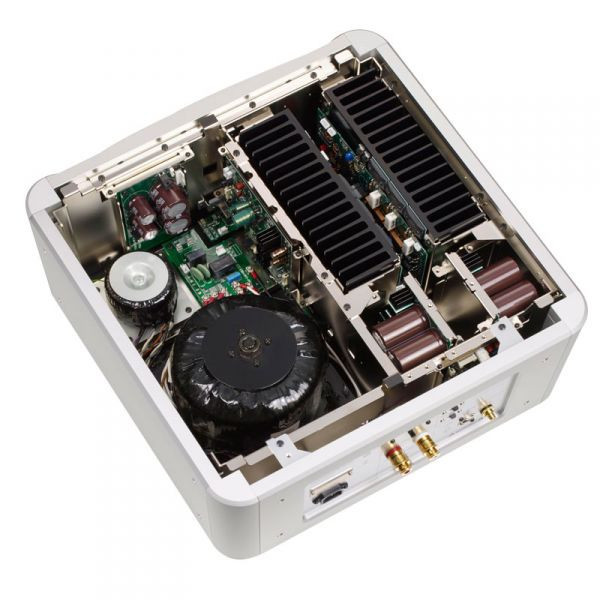 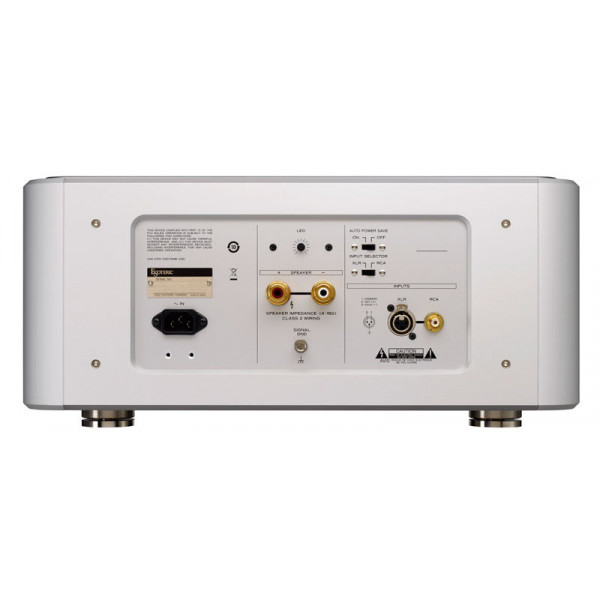 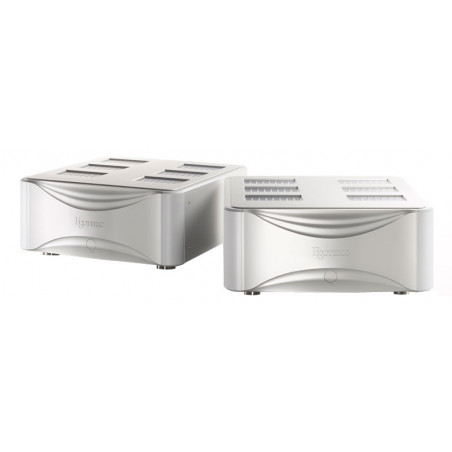 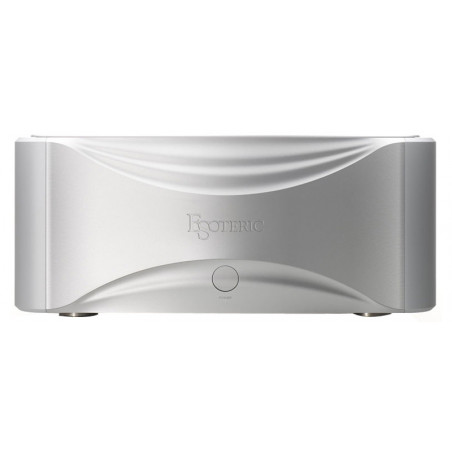 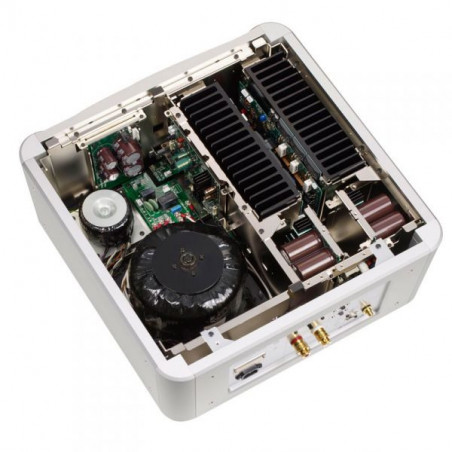 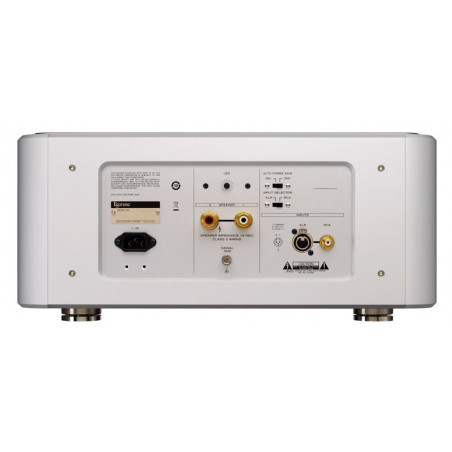 Spacious sound that can only be achieved by a high-power amplifier.

That moment when the sound is released from the speakers and the presence of the audio system disappears from before your eyes: This is the most thrilling moment of the listening experience. The overwhelming feeling of the spaciousness of sound and sense that the sounds are being generated live are enabled by the output wattage surplus power of the amplifier. The introduction of far-superior materials, such as large bipolar transistors with instantaneous 34 ampere capacity, that first enabled us to achieve 300 watts at 8 ohms high power. For a rich feeling of life, ESOTERIC's flagship power amplifier M1 communicates the music by vibrantly setting all of the sounds free.

to amplify to the limits of sound dynamics.

Speaker impedance changes drastically along with changes in the frequency of the sound being played. In cases such as continuous heavy bass or the impact and subsequent silence of a percussion instrument, impedance can abruptly drop and cause a situation where there is almost no load. The full expression of sound dynamics is not possible with these sudden changes in load unless there is a current supply capacity that can be constantly followed linearly. The best materials possible have been used for the M1 power supply unit to achieve theoretical-value power linearity from 300 watts at an 8 ohm load to 1200 watts at a 2ohm load. Sound dynamics are faithfully reproduced at all volume levels.

The decisive element in the M1's amazing linear high-power performance is the design of its strong power supply unit. ESOTERIC has long believed that the power transformer is the most important factor in sound design of an amplifier. The key to the overwhelming power and rich sound quality of the M1 amplifier is a custom-built ultra-large toroidal core transformer with a 3057VA core size and a mass of approximately 18 kg. Following ESOTERIC tradition, the bare (no-case) mount specs give top priority to sound quality. In order to make the fullest use of transformer performance capable of instantly supplying power from primary to secondary, the power supply unit features 16 pieces of 3,300μFF capacitors in 8-parallel configuration, with the shortened voltage charge time contributing to high-speed sound quality.

An amplifier drives the speakers by sending music information converted into electric current. The mechanism by which the amplifier drives the speakers is extremely simple, but considering that the current ranges from very weak to very strong, it is a near impossible task to accurately drive the speakers in a way that is always faithful to the music signal. In order to heighten the amplifier's ability to drive the speakers, it is necessary to find ways to reduce amplifier output impedance to an absolute minimum. In order to achieve low impedance, our full range of expertise was poured into the M1 to enable the use of a total of 16 busbars in the amplification stage and to eliminate the output stage coil, and exhaustive efforts were made to simplify the circuit design. The result was the achievement of the phenomenal figure of 1,000 for DF (damping factor), which can be consider a guideline value for woofer drive capability. Even large-diameter woofers that are notoriously difficult to drive achieve accurate damping, and sound is precisely reproduced with a voluminous feel across a wide range extending to the lowest frequencies.

A superior S/N:122dB is achieved at the input stage of the full-balance configuration

When designing the amplifier for signal amplification in the M1, maximum attention was given to noise processing. Bringing together circuit design expertise cultivated since the very start of ESOTERIC, we adopted a full-balance input stage that was achieved as a result of painstakingly detailed designs. The signal is received by dedicated input buffer amplifiers (totally balanced design) in each input channel (RCAx1, XLRx1), with low-impedance and full-balance transfer on the signal path up to the amplification stage. By eliminating common-mode noise and making the signal path resistant to the effects of noise, we maintained signal transfer purity up to the amplification stage, thereby achieving S/N ratio for a superior auditory feel. The overwhelming auditory dynamic range created through the amplification of a clean no-noise signal promises the listener a level of excitement that transcends spec values. The M1 does not give you just the dynamic expression of a high-power amplifier. It also has the extreme sensitivity needed to give you more nuanced gradations in between musical climaxes and silences.

Large bipolar LAPT* transistor components boasting the revolutionary current-supply capacity of 17-ampere continuous action and 34-ampere instantaneous action were adopted for the M1. In addition to the high power, the LAPT components also have superior high-frequency characteristics that enable them to provide subtle tonal qualities.

The power amplifier module has bipolar LAPT components in a three-stage Darlington configuration with six parallel push-pulls. To readily draw out the superior high-frequency characteristics of the bipolar components, we used a simple amplifier circuit that reduces the number of parallel elements as much as possible. By holding the number of amplifier-stage parts to a minimum and eliminating the output-stage coil, we were able to maintain signal path purity while at the same time focusing our efforts on reducing internal impedance through measures such as incorporating 16 busbars. In addition, the use of a two-module configuration mounted on two large aluminum die cast heat sinks helped to raise waste-heat efficiency and stability.

By making the amplifier circuit design as simple as possible and reducing previous-stage naked gain, we minimized negative feedback to realize a natural sound quality that overflows with full of vitality.

The current that the drive stage (current amplification stage) supplies to the speakers always fluctuates radically. To prevent this from affecting sound quality, the current amplifier stage -which is situated just before the drive stage and which receives weak signals from the input stage-has a dedicated toroidal power transformer and power supply circuit. These provide a stable power supply to this stage, making it possible to heighten the nuanced expressive power and resolution of each instrument, even in a musical climax performed by a full orchestra.

The signal input unit was designed with 1M ohm high impedance. This reduces the load on the preamplifier output circuit and makes it possible to fully draw out the performance capabilities of all preamps.

High-grade parts used throughout for outstanding characteristics and sensitivity

We carefully selected only the highest-grade parts for the M1 that are worthy of our flagship model. These include XLR input terminals that boast high reliability and high contact performance as well as ESOTERIC original RCA input terminals. The nextgen:WBT-0705Cu terminals produced by WBT are used for the speaker terminals. The use of pure materials (pure copper + gold plate) in the conductor core achieves high conductive performance and low resistance values. In addition, The M1 employs high-grade components such as low-impedance electrolytic capacitors and transistors with superior high-frequency characteristics achieved through a strict selection process including repeated audio and material properties testing.

The chassis is built using ESOTERIC's traditional two-level chassis structure. The strong internal 2 mm steel-sheet framework is segregated by circuit blocks into specialized compartments, and thorough wire and circuit mutual interference prevention is done using the optimum signal paths. The bottom chassis is built from 5mm thick steel. The total block layout of the internal framework is covered with a 5 mm aluminum panel and a front panel that is cut from 35mm thick aluminum. ESOTERIC's unique pinpoint feet provide a four-point support system that delivers a high level of rigidity with no resonance for the heavyweight housing. 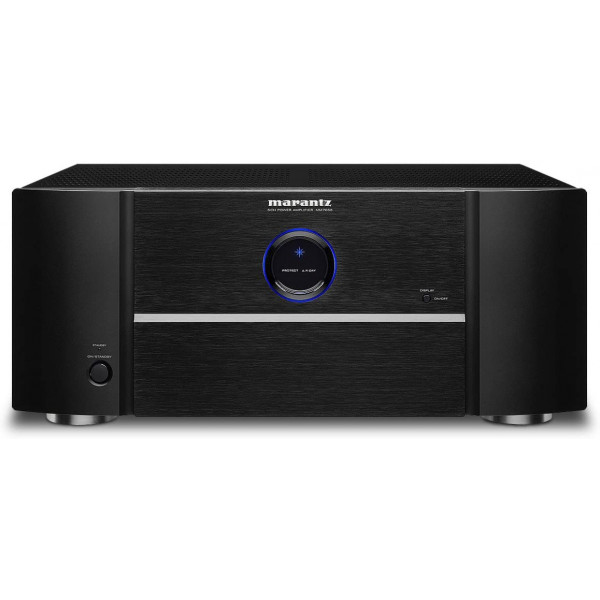 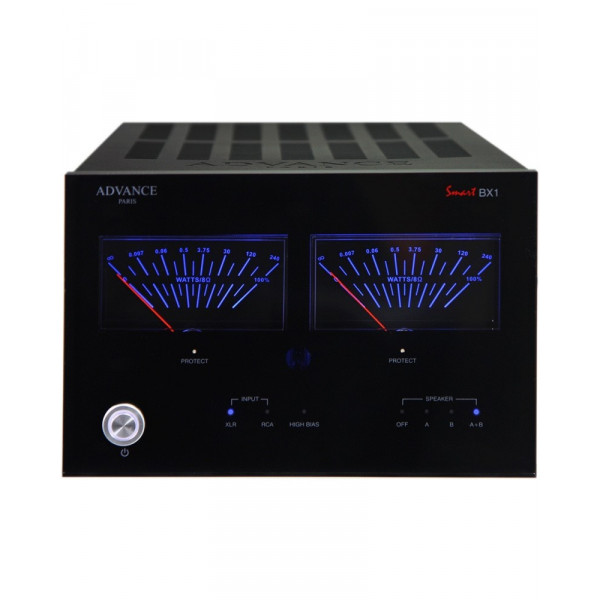 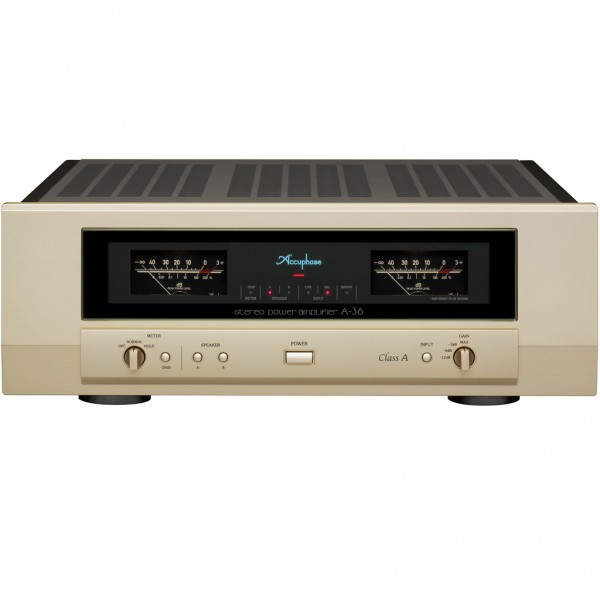 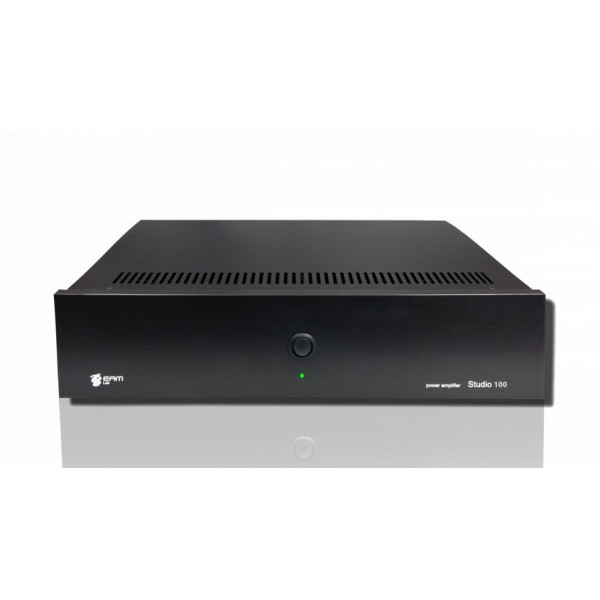 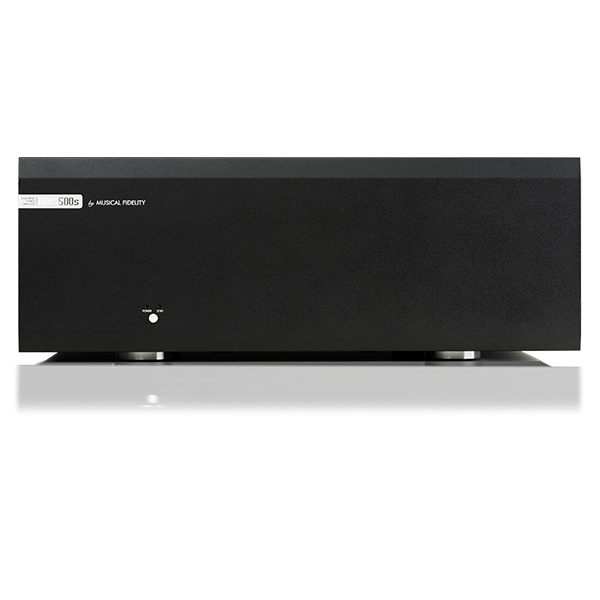 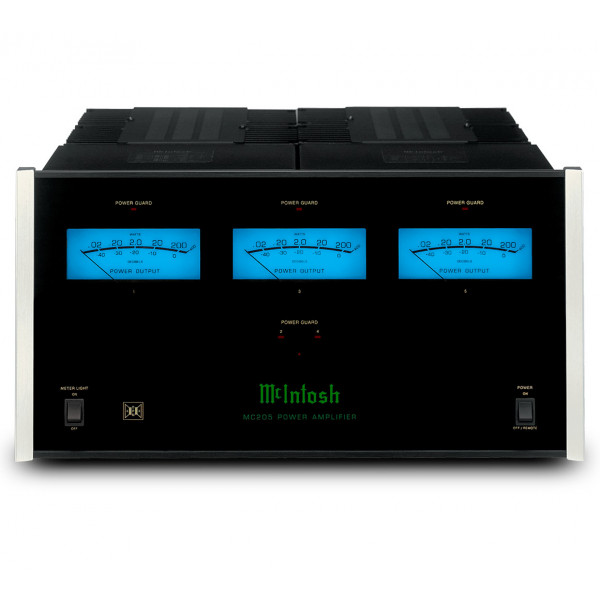 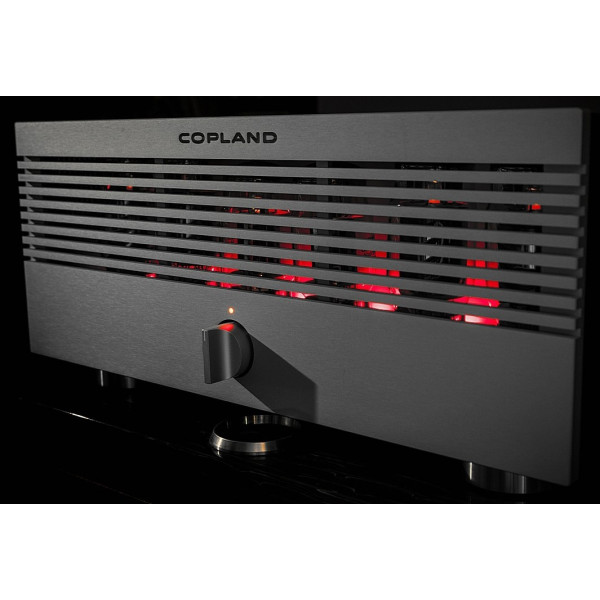 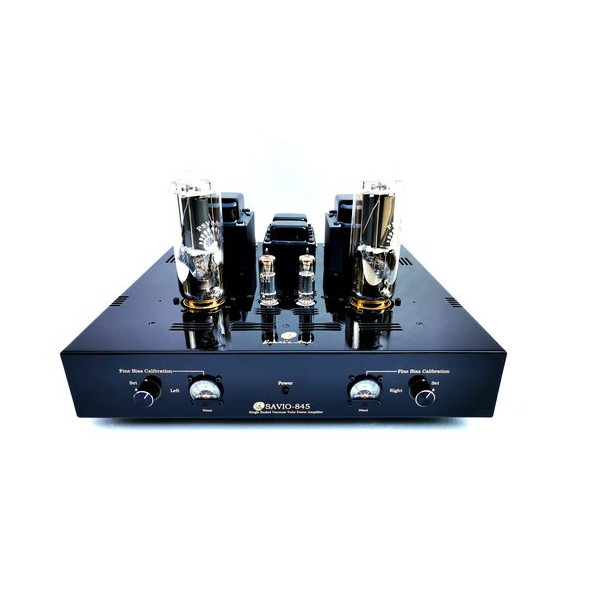 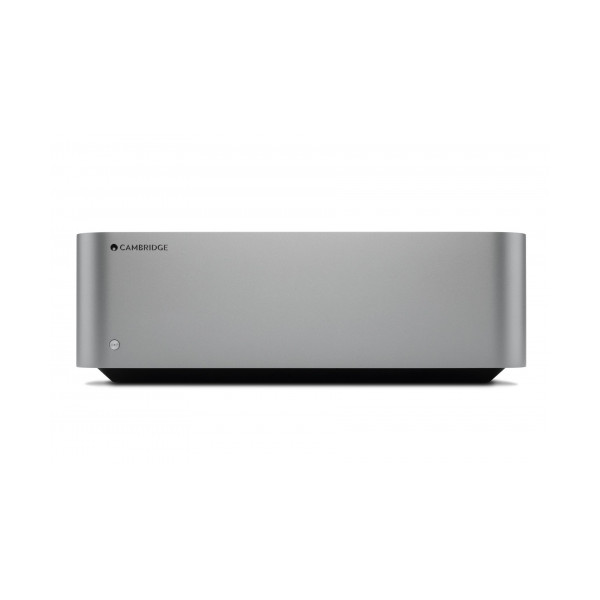 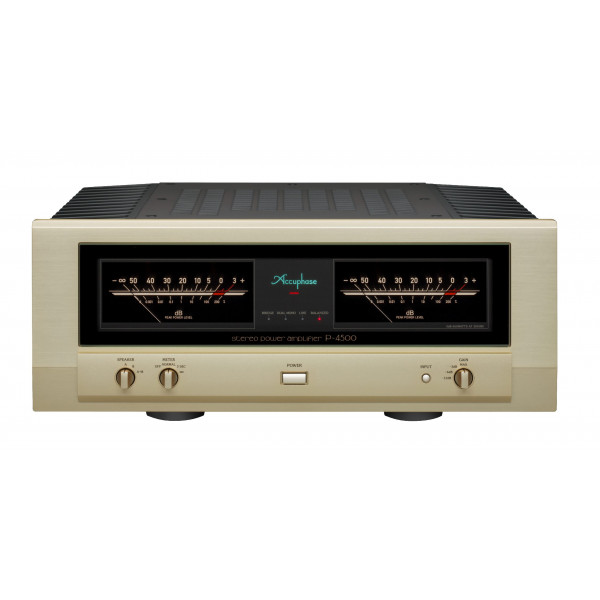 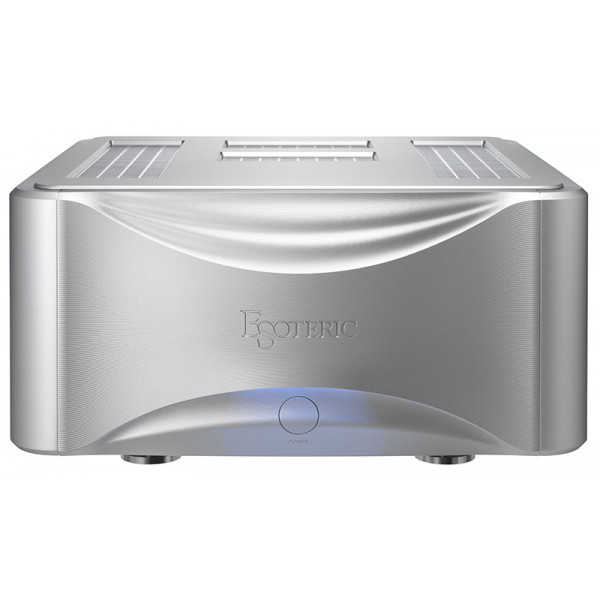 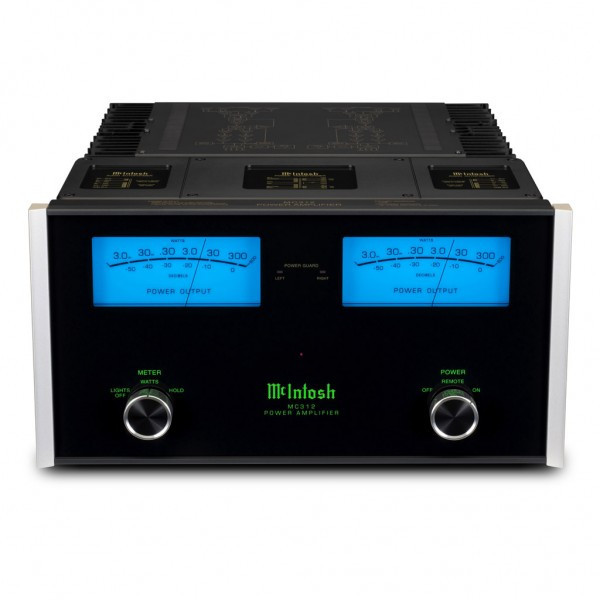 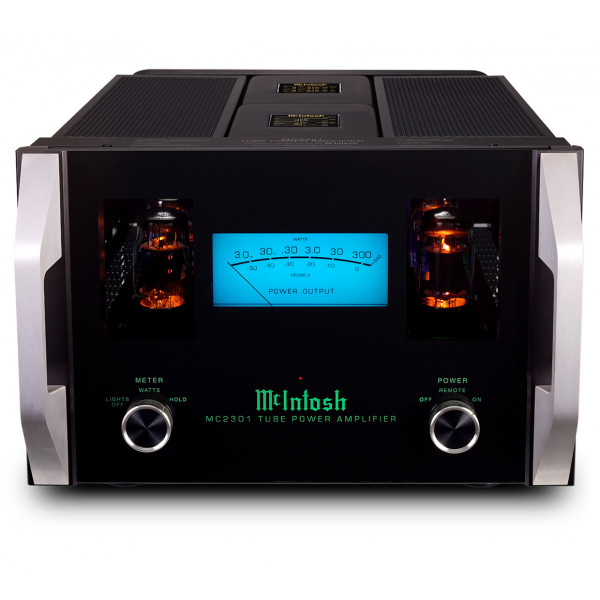 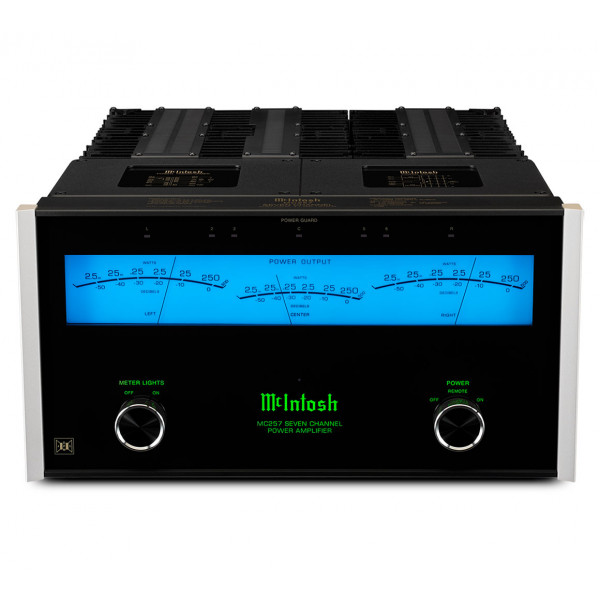